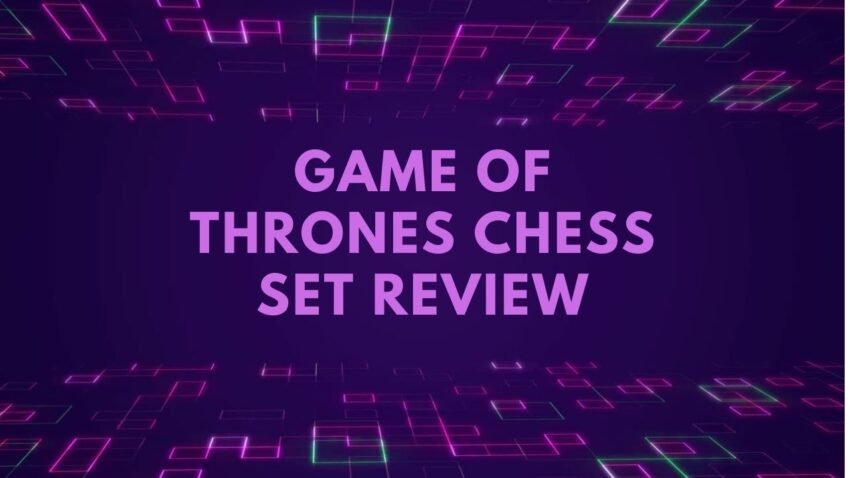 GAME OF THRONES has to be the most popular and hyped historical fiction series of the twenty-first century! It’s no secret that Game of Thrones has one of the most devoted followings in the world. A series rarely achieves the international acclaim that Game of Thrones has. Despite how popular the Game of Thrones series is, some people are still unaware of it, for understandable reasons! In this article, we will see a review of the Game Of thrones chess set.

Despite the fact that Games of Thrones is a beautifully written and depicted series, it does get vicious and cruel at times! So, for those who cringed at the thought of starting that series but are curious about what it’s about, here it is!

WHAT IS GAME OF THRONES AND WHY IS IT SO POPULAR?

In a world where seasons last for years, Game of Thrones follows the story of a medieval country’s civil war based on the imaginary continents of Westeros and Essos. While the novel begins, a decade-long summer is coming to an end, and winter is looming, as characters fight for the “Iron Throne,” the seat of the king of the Seven Kingdoms, the monarchy that dominates all of Westeros except the northernmost point. “Sit on the Iron Throne” is a metonym for “rule Westeros” in the show’s jargon.

There are three major plotlines in the show. The first explores the conflict amongst the lords of Westeros, particularly members of the Baratheon, Lannister, and Stark families, who are constantly competing for the Iron Throne.

The second season follows Daenerys Targaryen, the last of an exiled dynasty, as she gathers a military in Essos to recapture the throne. The third narrative takes place within the North of Westeros, among the Night’s Watch, an armed regiment that patrols the continent’s 300-mile-long, 70-foot-tall wall, which protects the rest of the continent from the fabled beasts that dwell there.

To avoid spoiling the show for many potential viewers, in a nutshell, the show is about gaining rules by playing the game of thrones, which is similar to the game of chess!

While the fantasy series is based on Martin’s book series A Song Of Fire And Ice, chess enthusiasts have used the Games of Thrones Chess Set to create their song of fire and ice.

The Game of Thrones Chess Set features 32 complex resin chess pieces that are superbly carved and faithful to actor likenesses. They sit on a special Iron Throne-themed board with an antiqued metallic gold checkerboard and a dragon scale textured back wrap. Fans will be able to showcase the powerhouses of both sides and recreate the epic battles at home because each piece is securely packaged in die-cut foam.

WHY YOU SHOULD PURCHASE THE GAME OF THRONES CHESS SET?

This fantastic game of Thrones Chess Set comes from USAOPOLY. This chess set is unlike any other you’ve ever seen. The chess set comes with 32 uniquely carved chess pieces that are modeled after characters from the HBO TV show. The 32 characters are split into two categories: Westeros and White Walkers.

This strategy game’s combat will take place on a special Iron Throne-themed board. The reverse of the chessboard is embossed with dragon scales and feels like glittering gold. It’s the closest chess set you’ll be able to find for Game of Thrones enthusiasts, therefore it’s a perfect present. Even still, it’s a fantastic present for anyone who enjoys medieval themes.

Even when you’re not playing, a distinctive medieval chess set will improve the atmosphere in your space.

It works well with a medieval theme, but it also works well with a gothic theme with dragon fans, and it looks excellent in the Game of Thrones style. Once you set the glass game board on top of it, it adds a great perfect finish. When playing chess, adds another element to the atmosphere.

This chess set appears to be incredibly expensive due to the combination of metal pieces and a wooden playing board. It’s a game of nice chess set to have in the room even when you’re not playing it.

Pros of unique the unique Game of Thrones Chess Set:

cons of unique the unique Game of Thrones Chess set:

With stunningly detailed movers and a richly adorned game board, this one-of-a-kind Game of Thrones Chess Set represents the imminent ultimate struggle between Westeros and the White Walkers.

About the Game of Thrones Chess Set

Is the Game of Thrones chess set used professionally?

No, the Game of Thrones chess set cannot be used professionally as it is a themed chess set. The most common type of chess set used in clubs, tournaments, and schools is a standard 3.75″ plastic Staunton set, usually with a roll-up vinyl board.

Is the Game of Thrones chess set FIDE approved?

No, the Game of Thrones chess set is not FIDE approved.

How tall are the pieces? and are they weighted?

They are approximately two and a half inches high and not weighted.

What material is used to make the pieces?

The chess pieces are constructed of resin and are intricately crafted to look like characters from Game of Thrones. The Westeros characters are on one side, while the White Walkers are on the other.

With the Game of Thrones chess set, you can see who wins in the epic fight between the living and the dead. This is the perfect choice for you whether you want to gift your son, grandson, mother, father, friend, or any of your loved ones who is a huge Game of Thrones fan, or if you want to add it to your chess set collection, or as a decoration for your home.